When COVID-19 struck in early 2020 attention quickly turned to the impact the pandemic was having on excess mortality. Excess mortality is a very useful way to measure the total mortality impact of the epidemic. This is because it accounts for the fact that some of the people who died from COVID-19 likely had a very short life expectancy for other health reasons, and may have died from those causes during the period in question. It also accounts for excess deaths not directly attributable to COVID-19 such as those caused by delays in seeking care for potentially lethal conditions (e.g. heart attacks) or lack of capacity in the health system to treat such conditions and a possible reduction in deaths due to other causes, such as influenza.

In many countries excess mortality can be estimated quickly: deaths must be registered in a matter of days and current mortality levels can then be compared to the trends observed in recent years.  This is not the case in Ireland. There is a three-month window for deaths to be registered with the General Registry Office (GRO). This is one of the longest registration periods in the world and many deaths are registered beyond the three-month period. This means that it is not possible to observe excess mortality in a timely fashion, unlike most other European countries which report to the European Mortality Monitoring (EuroMOMO) initiative (https://www.euromomo.eu).

An alternative approach involves monitoring death notices. There may be delays with formally registering deaths in Ireland but funerals are held in a timely fashion and the publication of funeral details is a part of this process.  In recent years, almost all funeral directors post the arrangements for funerals under their care on the website RIP.ie and most of these are posted within a day or two of the date of death.

Obviously, a count of death notices is not a formal measure of mortality but in the absence of reliable up-to-date mortality figures from official sources, it has proved to be a useful proxy.  Analyses of the data have been undertaken by the Central Statistics Office and the Health Information Quality Authority, a sign that these authorities both recognise the potential value of death notices as a proxy surveillance system.

From my own analysis here is what the cleaned data shows for the four years leading up to the pandemic.  A trailing seven-day average is used to remove a weekend effect on when notices are posted.

Official figures show that, on average, there are close to 90 deaths a day in Ireland.  The number of unique funeral notices posted to RIP.ie also corresponds to this, with a higher number of posts in the months of December, January and February and the lowest levels seen in July and August.

The spike in the above chart in early March 2018 may reflect the combined effects of that year’s influenza outbreak and Storm Emma.  We can use trends in death notices from recent years as a baseline against which to assess the level of notices posted to RIP.ie in the last 12 months. 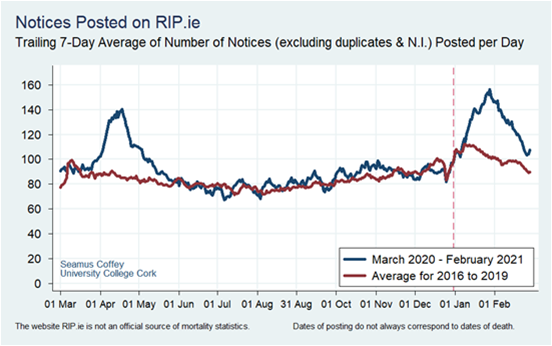 Beginning in March 2020 there are two periods of excess postings clearly visible.  The first was in April to mid-May 2020 and the second in January and February just past.  For the intervening period the level of notices in 2020 remained close to what would typically be expected for that time of year.

The pattern above closely matches the trend in deaths among COVID-19 cases by date of occurrence as published by the Health Protection Surveillance Centre. 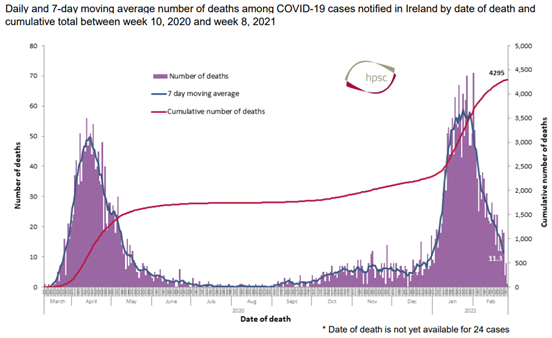 Quantifying overall excess mortality levels based on death notice data is not straightforward.  Ideally both population and age adjustments would be made to determine the underlying trends in mortality.  However, delays in death registrations mean that the necessary figures are only available with a significant lag.

The latest Vital Statistics Annual Report was published by the CSO in October 2020 but it was for the year 2018.  This means it could be another two years or so before official mortality figures for 2020 are published.

The information we have from death notices means that we may be able to make an informal estimate though it is not possible to do an age adjustment.  The following chart shows deaths per 1,000 population for each of the last five years for the period from the start of March to the end of February, i.e., not the calendar year. 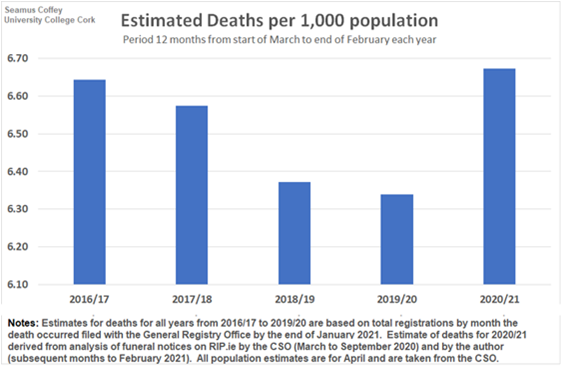 Figures from the General Registry Office are used for the first four year shown and these indicate a slight decline in the crude death rate over the period shown (though it should be noted that the vertical axis is heavily truncated).   For the most recent 12-month period in the chart we use mortality estimates based on funeral notices published by the CSO covering the period up to September 2020 and extend them to February 2021 using our own analysis.

The analysis of death notices indicates that the crude death rate rose in the past twelve months returning to levels not seen since before 2016.  It is impossible to know what would have happened in the absence of the pandemic but the difference in the 12 months to February 2021 between a death rate of 6.30 per thousand and one of 6.70 per thousand is approximately 2,000. It is likely that any estimates of excess mortality for the period will be within range of this value.

It will be some time before we know what happened to other causes of mortality during the COVID-19 crisis.  We do know, however, that there have been no cases of influenza detected during the winter flu season.

The crisis has brought many costs but maybe one small gain is that it has helped identify an informal real-time proxy of excess mortality which could serve as an early warning indicator long before any increase in death registrations is seen at the General Registry Office.

Health information relates to information on a person’s health; care that is being, has been or may [...]

The purpose, value and limitations of mathematical models in the COVID-19 pandemic: Perspectives fr[...]

Early Career Researchers: Making a Difference During the Pandemic?      [...]

Decades of research and trillions of Euro of investment have led to significant advanc[...]