The 2nd annual report of the National Healthcare Quality Reporting System was released in June 2016 by Ireland’s Department of Health and is available here. This is an excellent resource, prepared to the highest scientific standards, and reflects very well on the report’s authors. It can be used to help address a number of research questions which are of vital importance to policy makers.

When the report was released the media paid considerable attention to the finding that outcomes at St Vincent’s Hospital were significantly worse than the national average for patients suffering a heart attack or a haemorrhagic stroke.

This is alarming because St Vincent’s is a high volume centre for cardiac care and a consistent theme of acute hospital policy initiatives in Ireland (e.g. the Higgins report on hospital groups) has been the need to transfer complex care services from smaller hospitals to larger hospitals, based on a belief that outcomes are sensitive to volume. In the past we have had to rely on interpretation of the international literature to support this belief. But the National Healthcare Quality Reporting System allows us to investigate whether it is, in fact, better to be treated at a larger hospital when one has a condition such as a heart attack. I have provided an example below of what is possible.

Using the raw data published on pages 67 of the report one can examine volumes at each of the 27 treating hospitals where data on acute myocardial infarction cases is available in Ireland. The results (which cover the period 2013 to 2015) are striking. There is enormous variation in volume over the three year study period – from 123 cases (Bantry) to 2,170 cases (Mater) – close to an 18-fold difference. It can be argued that low volume units are inevitable in certain remote parts of the country. But in Dublin there are six different hospitals treating heart attack patients with a 5-fold difference between the lowest volume hospital (Blanchardstown) and the highest (Mater). And in Cork there is one very high volume hospital (CUH) and one very small volume hospital (Mercy). If outcomes are sensitive to volume, why hasn’t care for heart attack patients been rationalised in Dublin and Cork? If it is possible to do so in a rural part of the country like the Mid-West (where there is now only one treating unit for heart attack patients in Clare, Limerick and North Tipperary) surely it is possible in an urban area like Dublin where travel times are much shorter?

When one maps volume against outcome it is not sensible to compare hospitals without a primary percutaneous coronary intervention (PPCI) centre to those with one because the more serious patients are often transferred from the former to the latter. To deal with this I have performed separate analyses. In the 20 hospitals without PPCI there is a very weak association apparent between volume and outcome (see figure 1 below). In the 7 hospitals that do have PPCI there is a slightly stronger trend in favour of larger volume units, albeit based on a very small number of observations (see figure 2 below). 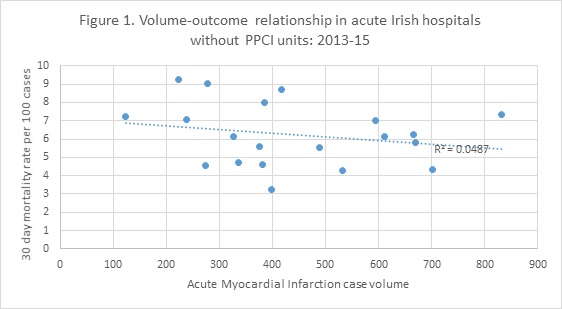 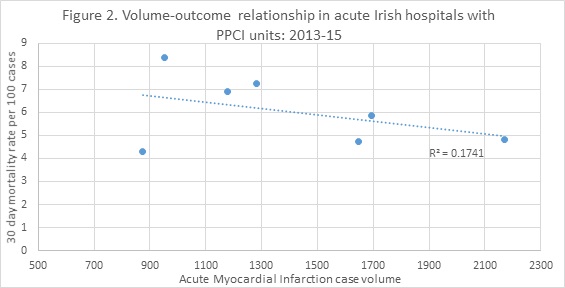 What can we learn from the above? First, the volume-outcome relationship in both types of hospital that care for heart attack patients in Ireland is weak and on its own does not provide a clear signal to policy makers about favouring high volume centres. Second, there seems to be considerable opportunity for rationalising the care of heart attack patients in our two largest cities. Even if there is no relationship between volume and outcome we should look to avail of obvious efficiencies, especially when doing so does not place a great access burden on the populations affected. Third, we are now at the point where we can start using our own data to guide policy making on the ideal volume for complex care units. Other analyses can be performed for stroke and hip fracture based on data available in the National Healthcare Quality Reporting System.

All of the above rests upon the assumption that any important case-mix differences between hospitals have been dealt with by age standardisation and stratifying the analysis by PPCI. This may not be the case and further work is needed to investigate the impact of case-mix adjustment on any comparisons.

If you have any questions or comments please contact Martin on m.davoren@ucc.ie